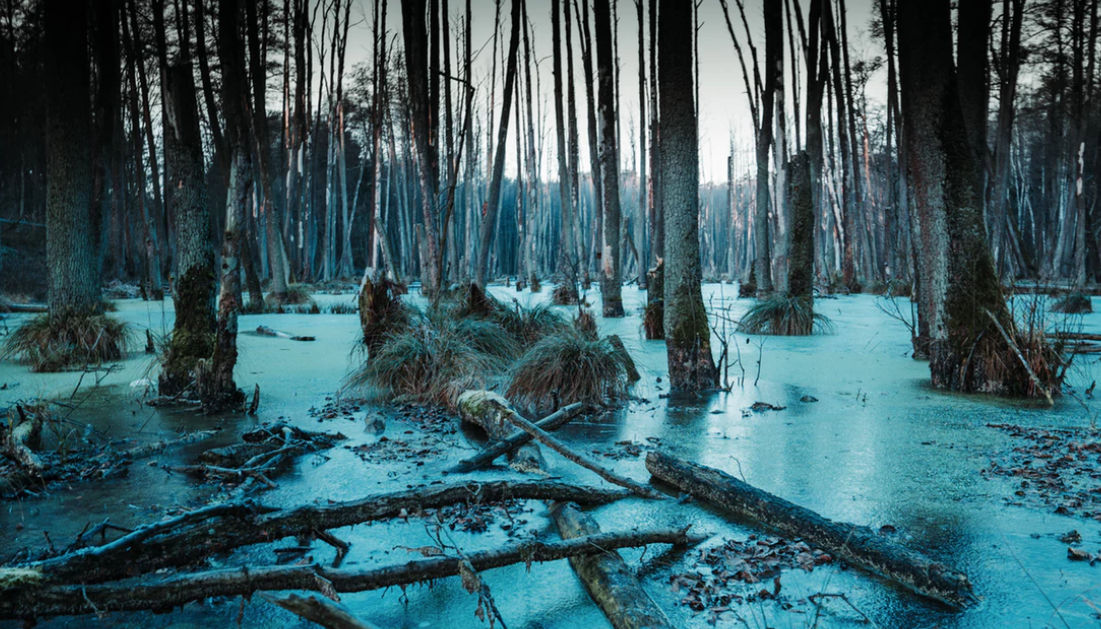 Titusville, a non-assuming coastal town and the county seat of Brevard County, Florida, is situated on the famous Indian River just west of the Kennedy Space Center. Home of the American Space Museum and Space Walk of Fame, it is this progressive and technological association Titusville has enjoyed over the decades with the Kennedy Space Center for which it has become best known.

However, Titusville would become famous for more than its association with bold journeys to the stars: it was here in 1982 that a discovery was made that would turn back the pages of history almost 7,300 years, becoming one of the most important in North American archaeology, and forever cementing Titusville in the pages of Florida history.

It seemed like any other sunny day on the east coast of Florida for backhoe operator Steve Vanderjagt, as he moved his equipment with the intention of clearing debris around a pond for what would become the Windover Farms housing subdivision.  As the treads of the machine moved forward and the bucket dipped down into the peat, Steve noticed what he first thought were rocks or other debris. Thinking this was quite unusual for the area, he stepped down from the backhoe. Reaching out to the peat stained stone, he grasped it firmly in his hands.

“As I turned it around, it was looking at me, and that’s when we stopped,” Steve would later recall in an interview for a Science Channel documentary. The site supervisor was called over and the conversation turned to the possibility of a murder site, as more skulls were found in the bucket of the backhoe and around the immediate area. After the county medical examiner inspected the site, it was determined the bones were indeed much older than any modern murder victims would have been, after which the site was referred to Florida State University anthropologist Glen Doran.

Being that the high acidity in Florida soil generally lends to fast decay, the majority of human remains found under similar circumstances are not more than 500 years old. It seemed to be a safe assumption that the bones here at Windover would fall within 500 to 1,000 years old; however, the neutral peat at Windover provides near-perfect conditions for preservation.  After Doran’s initial examination, samples of bone were sent off for carbon dating analysis. The dates returned were indeed a surprise to all parties involved, including Doran: the carbon dating showed that the remains were at least 7,000 years old. It was recognized immediately that the Windover site had the potential to open new and unknown doors to the past and provide new insight about a culture that had long been forgotten, but to exactly what degree they were only beginning to discover.

The developers of the Windover subdivision rerouted their original plans, and over the next two years, money was raised for the proper excavation and study of the monumental new site. Once the money was appropriated, wells were dug in the vicinity to lower the groundwater, and pumps were brought in that removed up to 1,000 gallons of water per minute to get the pond drained to the point that excavation became feasible. Between 1984 and 1986, excavations were conducted that revealed at least 200 separate intact burials. The bodies were found in fetal positions and appeared to have been stacked at the bottom of the pond. This provided immediate insight into the burial practices from this region and time, which otherwise might never have been known. This, however, was only the beginning.

Just a few weeks into the excavation, a discovery of unparalleled importance was made. One of the project directors noticed a lump of dark material similar to a stain along the interior of one of the skulls. Slippery and wet to the touch, the excavators realized this could potentially be the remnants of brain matter, and with cautious ambition, a sample of the substance was retrieved and sent away for laboratory analysis. Once it returned, it was accompanied by an unbelievable diagnosis: the team had indeed found the remains of human brain tissue.

According to Joseph L. Richardson of the Windover Archaeological Research Project, at the end of the three six-month field seasons, a total of 91 skulls would be discovered that contained brain tissue, and some even contained entire, intact brains. This priceless tissue was preserved in a frozen state for future study.

While most of the bodies were buried in the same fetal manner described above, two bodies were found that had been buried in extended positions. According to Richardson, one of those was a female estimated to be 35 years old at the time of death who was discovered face down, the remains of what had been her final meal still in her stomach. Among its contents had been bones and fish scales, along with seeds from various types of grass and berries. In particular, roughly 3,000 elderberry seeds were found in her intestine, a fruit known today for having anti-viral properties. There is no way to determine if this medicinal property had been the reason she consumed such a large number of the berries. However, it is possible that through trial and error these early American cultures would likely have discovered such natural remedies.

According to Richardson, the ages of the bodies ranged from fetal infants to adults as old as 60 years at the time of death. A 50/50 ratio of adults to children were recovered, and among the remains had been a mother who passed away just weeks before delivering a full-term infant. Amidst these ancient tarnished bones had also been evidence that these people had not lived a particularly nomadic lifestyle, as earlier data seemed to suggest.

One of the main goals of archaeology and anthropology is to understand the people we are studying. We attempt to rebuild their lives based off of our observation of tools, artifacts, and occasionally even their art. It is exceedingly rare that we are afforded such insight into the daily lives of ancient people as we do at the Windover site. One example Richardson shares is the story of a woman, believed to be 50 years old at the time of her death, whose bones showed multiple fractures that occurred several years before her passing. These injuries would have prevented her from functioning in any way expected of nomadic people. Being that the injuries were healed indicates that someone must have cared for the woman for extended periods; possibly an individual or family group aided her until her recovery.

A second case relays the story of a teenage boy 13-15 years old. This individual, in addition to having been a victim of spina bifida, also possessed one severely deformed foot. The bones of the opposite leg indicated the presence of a severe infection at one time, and ultimately, the loss of the foot and a portion of the leg. Due to his age, we can see that he was not killed upon birth for being too weak, or left abandoned to die; the boy was obviously cared for, and managed to live for many years before succumbing to what was likely a fatal infection.

None of the remains recovered from the bottom of the pond were tossed in or arranged haphazardly. Each had been wrapped carefully in cloth, and placed delicately in this location–in all likelihood, a place revered the people who used it for such burials–and often with special items of possible ritual significance, for use in the afterlife.

Other significant findings from the site included some of the most well-preserved ancient fabrics found anywhere in the world. Dr. James Adovasio, one of the foremost authorities on perishable artifacts, examined these samples and found that the yarn from which they were composed was made of fibers from various native plants. The fabrics were made using at least seven different complex weaves; according to Richardson, such patterns would likely have required the use of some type of loom in order to be made in this way.

After the excavations were completed, the Windover site was filled with the same peat that was initially removed from the area, and continuing studies will likely occur there at a future date when more funding is available. There is certainly still much to be learned from that pond tucked away in Titusville, Florida; under its peat stained waters, America’s beginnings rest quietly, and await the next opportunity to reveal their secrets.