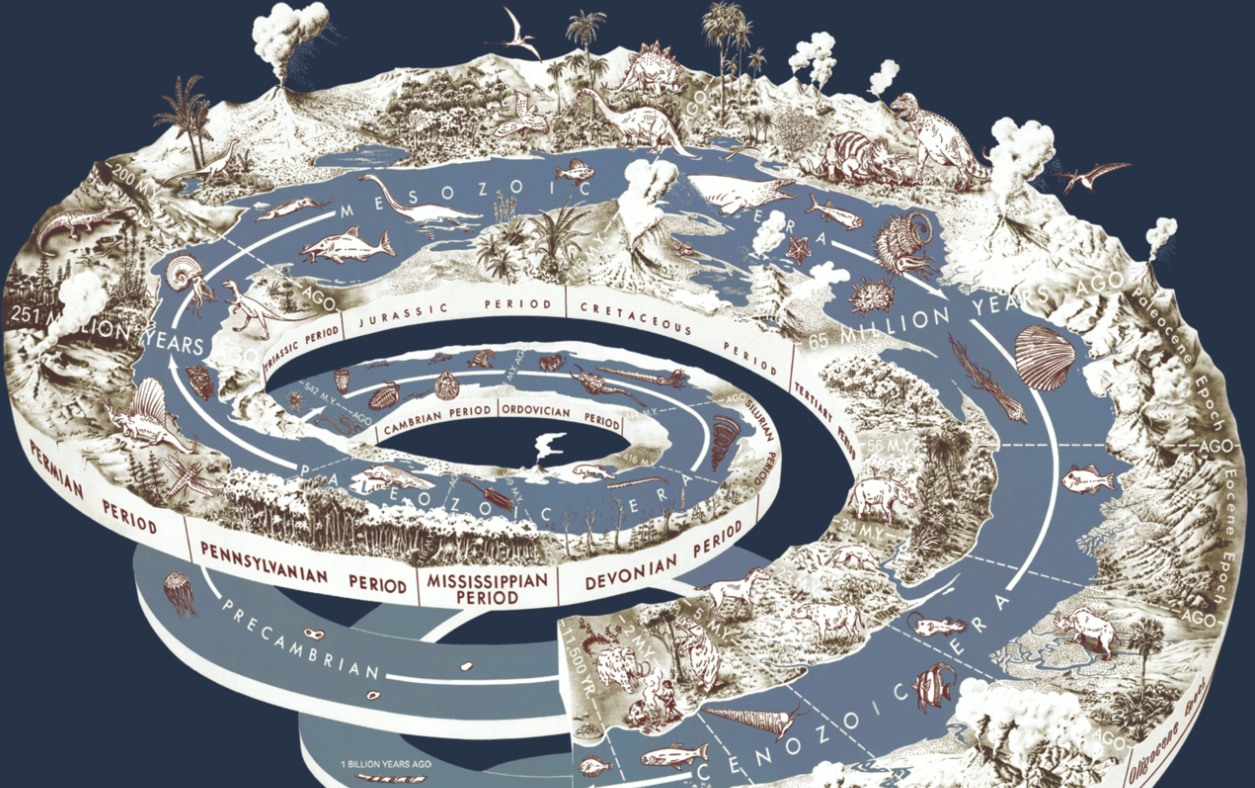 Much of the relative time scale of the Earth had been constructed before the arrival of the 20th century. The absolute age of the Earth at that time, however, was another matter.

Early on, there was no way to determine the actual age of earthen strata. Young Earth creationists believed, based on biblical texts, that the Earth was only a few thousand years old, while others proposed much older ages. This debate raged on until the latter half of the twentieth century when radiometric dating techniques were first developed. Since that time, these techniques have provided generally accurate absolute dates for geologic strata and the age of the Earth.

The concept of ‘Deep Time’ is synonymous with geologic time, a vast and somewhat mysterious period, which chronicles the life age of the Earth. The geologic time scale is the calendar of this Deep Time, by which scientists have dated and placed in proper context the major events of the Earth’s history.

The modern geologic time scale’s origins begin in 1669 when Nicholas Steno (1638-1686), a Danish geological pioneer, published ‘De solido intra solidum naturaliter contento dissertationis prodromus’ or ‘Preliminary discourse to a dissertation on a solid body naturally contained within a solid’. In this work, Steno theorized how fossils, minerals, crystals, veins and other inclusions could come to be found inside solid rock.

Steno reasoned that all rocks had once been fluid and that rock strata would be formed when particles in the liquid sank to the bottom leaving horizontal layers and, therefore, the oldest layers would be on the bottom and the younger layers on the top and any rock layers that are now folded and tilted have since been altered by outside forces. This became known as the ‘principle of original horizontality’ and is one of the basic principles of geology to this day. This principle was the first relative dating technique for geologic strata. Through this understanding, scientists came to realize that the Earth is not static and that great changes have occurred in the distant past.

In 1795, James Hutton introduced the concept that natural geologic processes were uniform throughout time. In other words, the geologic processes that we can see and measure today were the same processes at work throughout the history of the Earth. This concept became known as the ‘principle of uniformitarianism’ and is another fundamental concept of modern geology.

A few years later in 1815, William Smith, a surveyor and amateur geologist produced a geologic map of England based, correctly, on faunal succession. Simply put, this principle states that fossils are found in very definite stratigraphic sequences. This principle allows for the dating of strata within a relative timescale.

The first attempts at creating a formal geologic timescale for the planet were performed by Abraham Werner in the late eighteenth century. Werner’s timescale divided the Earth’s rocks into four categories: primary, secondary, tertiary and quaternary. Thus, references could be made to the ‘primary period’ or ‘primary rocks’. Of these four categories, ‘tertiary’ and ‘quaternary’ are still in use today. The principle of faunal succession allowed the Earth’s history to be divided into more precise time periods and to correlate discrete strata across continents and even oceans. The early studies of these European strata formed the basis of the modern geologic time scale.

The early years of geology were primarily a British endeavor, therefore many of the terms and naming conventions were heavily influenced by British culture. Starting from the earliest rock formations, the ‘Cambrian’, ‘Ordovician’ and ‘Silurian’ periods were defined using stratigraphic sequences in Wales, and named for ancient British tribes; the ‘Devonian’, for instance, refers to the British county of Devon. The Carboniferous was named for British coal beds called ‘coal measures’. The Permian was named for Perm, Russia, using strata from the region defined by Scottish geologist Roderick Murchison.

The geologic time scale divides the geological history of the Earth into a set of hierarchical units of time. The accepted divisions today, in decreasing units of time, are eon, era, period, epoch and age. These different eras and periods are often marked by a ‘boundary event’, such as the first appearance of animals with hard body parts, or a mass extinction.

Through relative dating techniques, the geologic time scale is largely divided on the basis of the Earth’s biological history of advanced life forms. The period before life is known to have existed is called the Precambrian Eon, and is sub-divided into the Hadean era, the Archaean Era and the Proterozoic Era. It spans from the formation of the Earth until approximately 541 million years ago and it accounts for approximately 90% of the Earth’s geologic history. The biological period is called the Phanerozoic Eon and it is sub-divided into the Paleozoic era (meaning ancient life), the Mesozoic era (meaning middle life) and the Cenozoic era (meaning recent life).

Humanity only appeared on the Earth a short time ago, geologically speaking. We’re living in the Holocene epoch of the Quaternary period, of the Cenozoic era of the Phanerozoic eon. To put things in perspective, all of human history has occurred during the Quaternary. The Pleistocene and the Quaternary both began 2.58 million years ago, with the beginning of our current ‘Icehouse Earth’ condition (yes, we’re currently in a brief pause in a much longer ice age). The Holocene began approximately 11,700 years ago at the end of the last major glaciation.

The Arrival of a New Epoch?

Recently, there has been a movement within popular culture and among some scientists to designate a new epoch, named the ‘Anthropocene’, anthropo for “man” and cene for “new.” This epoch would date from the commencement of significant human impact on the Earth’s geology, however, there is much debate on this topic. The arguments against adoption of the new epoch include that it’s more about pop culture than science; it’s also difficult to define an exact time when humans began affecting the rock strata (the definition of the beginning of an epoch), and humans have yet to significantly affect the earth’s geology.

Today, the geologic time scale is governed by the International Union of Geological Sciences (IUGS) and the International Commission of Stratigraphy. These organizations standardize colors and time scales used on geologic maps. These organizations have established international working groups to further refine the boundaries of the geologic time scale. Many reference locations have been established, called Global Stratotype and Points (GSSPs), where geological boundaries have been marked and dated.

The geologic time scale has been indispensable for the development of the science of geology. Without it, scientists would not be able to communicate effectively and share ideas and geologic concepts like Deep Time. With the help of this universally accepted framework, scientists are able to fit together the Earth’s geologic history, and thus, the history of life on our planet.

The Radiocarbon Revolution: Dating the Past Through Chemistry