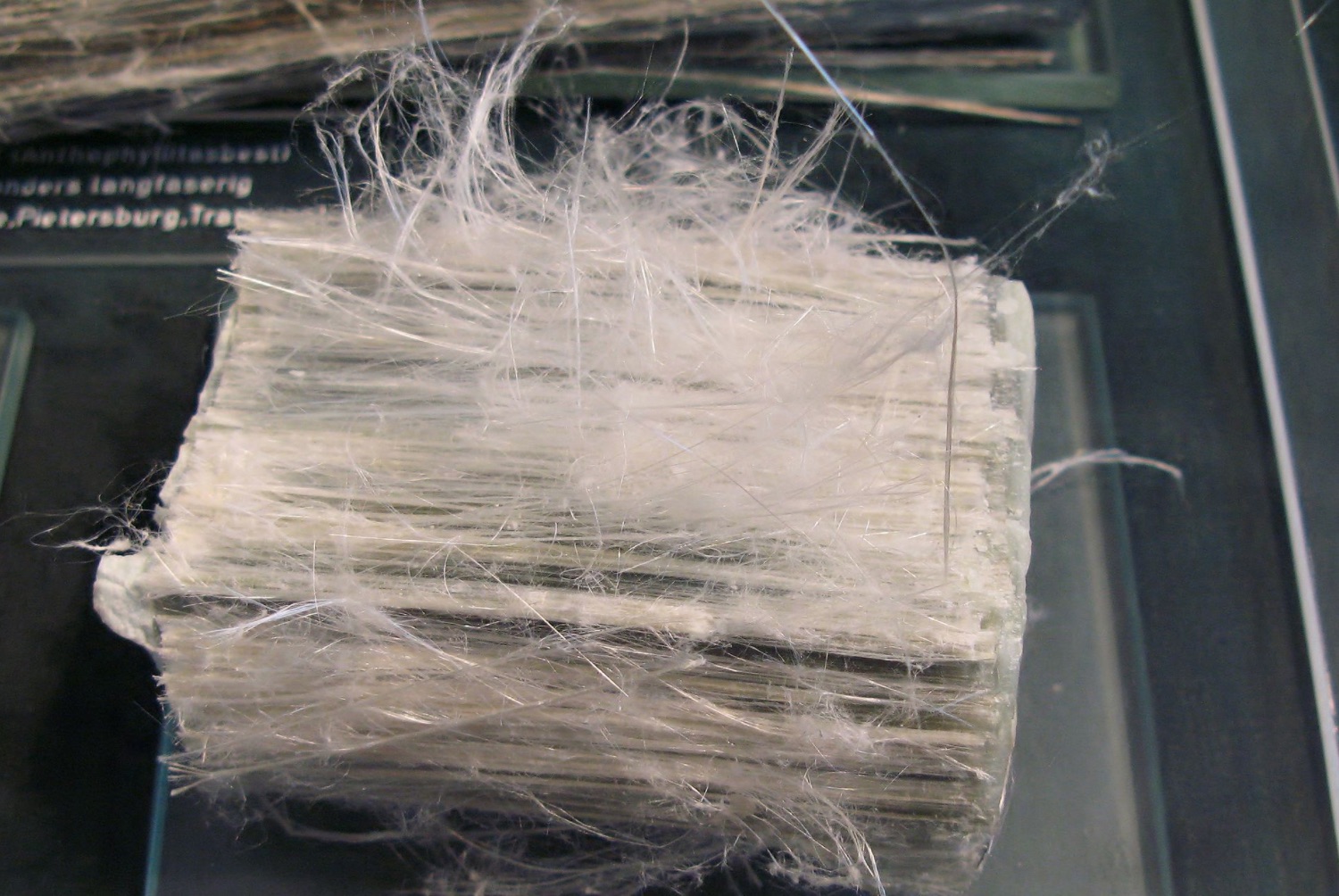 Asbestos is a naturally occurring fibrous mineral. Known to humanity for more than 4,000 years, the Greeks were first to find a practical use for the substance, followed thereafter by the Romans, by weaving it into clothing for slaves.

The word asbestos refers to a family of six asbestiform silicate minerals that all have similar properties. The term asbestiform describes a mineral that is made up of long, flexible, thin crystals with a high tensile strength that readily separate. These fibers are capable of separating into microscopic filaments so small that they can only be seen with an electron microscope. The primary types of asbestos are Chrysotile (white asbestos), Amosite (brown asbestos), Crocidolite (blue asbestos), Tremolite, Anthophyllite, and Actinolite.

Of all these types, Chrysotile (from the Greek for gold, chrysos; and fiber, tilos) is the most common, accounting for 90-95% of all asbestos that remains in buildings today. Amosite was the second most commonly used asbestos with the other forms making up the remaining percentage.

At some point, its fireproof properties were realized in ancient times, and thereafter it was used in creating wicks for the “eternal” flames of the vestal virgins and insulation in ovens and buildings. Eventually, asbestos became fashionable clothing for kings and queens. It was also used for napkins and tablecloths and since it was fireproof those items could be cleaned by throwing them in the fire and burning away food and drink residue instead of washing it away. This process was called “amiantus”, meaning “unpolluted”, by the Romans. The Greeks likely mined their asbestos on the Greek island of Evvoia, which would make it the first known asbestos mine.

An Ancient Prize, with a Price

Although the Greeks and Romans highly prized asbestos for its many useful properties, they also recognized the health risks associated with it. Pliny the Elder may have been the first to document “sickness of the lung” in the slaves that worked in the asbestos mines. He pointed out that those slaves who worked in the asbestos mines had a high incidence of dying young and were, therefore, a bad investment. Pliny the Elder was also the first to recommend that respiratory protection be used by those mining asbestos. Pliny’s respirator design was made of transparent bladder skin.

After the fall of the Roman Empire and in the Medieval Era, the mining and use of asbestos sharply declined. The remaining items like napkins and table clothes became curiosities of the rich and famous. Charlemagne was said to possess a tablecloth woven from asbestos that he would use to impress his guests. After dinner, he would yank the tablecloth from the table and cast it into the fireplace with great dramatic flair where the tablecloth would proceed to go untouched by the fire much to the amazement of all. Also during this time, traveling merchants of the less desirable type would sell crosses carved from asbestos. The asbestos resembled weather-beaten wood. This “wood” was said to have come from the cross that Jesus was crucified upon and to cast off any doubt the crosses would be thrown into a fire where they would be unharmed.

However, asbestos wasn’t truly ‘discovered’ for industrial use until the end of the 19th century during the Industrial Revolution. All of those amazing industrial machines that were changing the world created copious amounts of heat that needed to be controlled somehow. Asbestos was discovered to be the perfect high-temperature insulator for literally every conceivable application.

This created a demand for asbestos, the “Wonder Material”, which in turn kicked-off the asbestos mining industry. The first commercial asbestos mine opened in Quebec in 1879 followed by several in the United States on both the east and west coasts. Asbestos was also mined in Russia, Australia, and South Africa.

Mining of asbestos peaked around 1973 and then sharply declined after its use began to be regulated. Mining continued in the United States until 2002 when the last remaining mine, located in California, closed. The most famous, or infamous, asbestos mine in the United States is the W.R. Grace vermiculite mine in Libby, Montana. It was discovered that the entire town was contaminated with dust from the mine. Many workers died from working in the mine and more than 1,000 residents became ill from exposure to the dust. The mine was declared to be a Superfund site in 2002 and the EPA declared a public health emergency, never before done, for the town of Libby in 2009.

Asbestos went on to be used in a conservatively estimated 3,000 different products. A short list of the types of products include insulation, gaskets, cement, cigarette filters, electrical insulation, fireproofing, plastics, talcum powder, vinyl, textile cloths and garments, building materials, floor tile, adhesives, roofing products, ‘fake’ snow, ceiling tiles, siding and vehicle brakes and clutches. In old movies, often times the ‘snow’ that would be sprinkled down onto the actors was pure asbestos!

The Dangers of Asbestos

The danger of asbestos lies in its fibrous morphology. The individual fibers can be so small that it can stay airborne indefinitely as long as the air continues to move. When breathed in by humans, the microscopic fiber can easily bypass the body’s defenses in the airways and make their way into the furthest reaches of the lungs. The fibers become lodged there and since they are an inorganic, silicate material the body cannot break them down or absorb them. Instead, scar tissue is formed over them.

With enough exposure, the lungs can be severely damaged, leading to a condition known as asbestosis. This can further lead to conditions including lung cancer and mesothelioma (a fatal cancer of the pleural lining around the heart and lungs). There is no known safe exposure limit to asbestos, and persons who occupationally exposed to asbestos and also smoke tobacco have a death rate 28 times higher than average.

By the 1930s the medical evidence for diseases linked to asbestos was already being compiled. Manufacturers were aware of the evidence and the risks, but most of them did not warn their workers or the public about the dangers. Since the latency period for asbestos-related diseases is 20-30 years the public was mostly unaware of the dangers until the 1960s. Not only was it discovered that asbestos was hazardous to the workers, there were also secondary dangers to the workers’ families. Workers would wear their asbestos-contaminated clothing home from work where it would also expose their wives and children. This is when the first widespread lawsuits began to be filed and marked the beginning of the end for the use of asbestos in manufacturing.

In 1970, the Clean Air Act first identified asbestos as a hazardous air pollutant. This law established the National Emission Standards for Hazardous Air Pollutants (NESHAP). This is the law that governs all institutional, commercial and industrial buildings in regards to asbestos, among other things. Its key requirements are before any demolition or renovation operation a thorough inspection for asbestos be performed and a formal notification is required to regulatory agencies before any demolition or renovations are performed that will impact a certain threshold amount of regulated asbestos-containing material. The Toxic Substances Control Act (TSCA) followed in 1976. This Act gave the EPA the power to regulate new and existing dangerous or toxic materials. U.S. consumption of asbestos peaked in the early 1970s and global consumption peaked around 1977.

The EPA attempted to completely ban asbestos use and manufacturing in 1989 under the “Asbestos Ban and Phase-out Rule”. However, several corporations challenged the rule in court and in 1991. The U.S. Court of Appeals for the Fifth Circuit overturned much of the rule. The ruling by the court upheld the ban of the manufacture and use of corrugated paper, roll board, commercial paper, specialty paper, flooring felt and new uses of asbestos after 1989. Among the materials that were not banned are a variety of asbestos cements, clothing, pipeline wraps, roofing felt, vinyl floor tile, millboard, cement piping, clutches and brakes, gaskets and roof and non-roof coatings.

1986 saw the passing of the Asbestos Hazard Emergency Response Act (AHERA). This is known as the “asbestos in schools’ law. It required all public and private schools K-12 to inspect facilities for asbestos and develop management plans to repair, maintain or remove asbestos-containing materials. Every school in the country had to be inspected for asbestos with management plans completed by the end of 1988. This law almost single-handedly birthed the modern environmental consulting and asbestos abatement industries. Although these types of businesses existed before the law was passed, thousands of companies sprang up overnight to take advantage of the work required to complete this monumental task.

The Bankruptcy Reform Act of 1994 amended the bankruptcy code to allow companies with significant liabilities to seek bankruptcy protection and it provided provisions to settle future claims through the creation of special bankruptcy trusts. Additional legislation has been introduced in the past decade, with further unsuccessful attempts at complete bans.

Thus, it is widely held that asbestos has been “banned” for years, but as we see, this is not entirely true. Although products containing asbestos are required to be labeled, manufacturers will often opt for using terminology like “this product contains chrysotile mineral fiber” or other similar descriptions. This fulfills their obligation to label their products, but it’s not much help unless someone knows the mineral names of the different types of asbestos.

Today, there are many asbestos-containing products that can be bought by the general public in any big-box home improvement or hardware stores. Simply put, the reality is that nearly every human alive on the planet, no matter where they live, has probably been exposed to asbestos at some point.

1 thought on “Asbestos: Controversial “Wonder Material” of Past and Present”