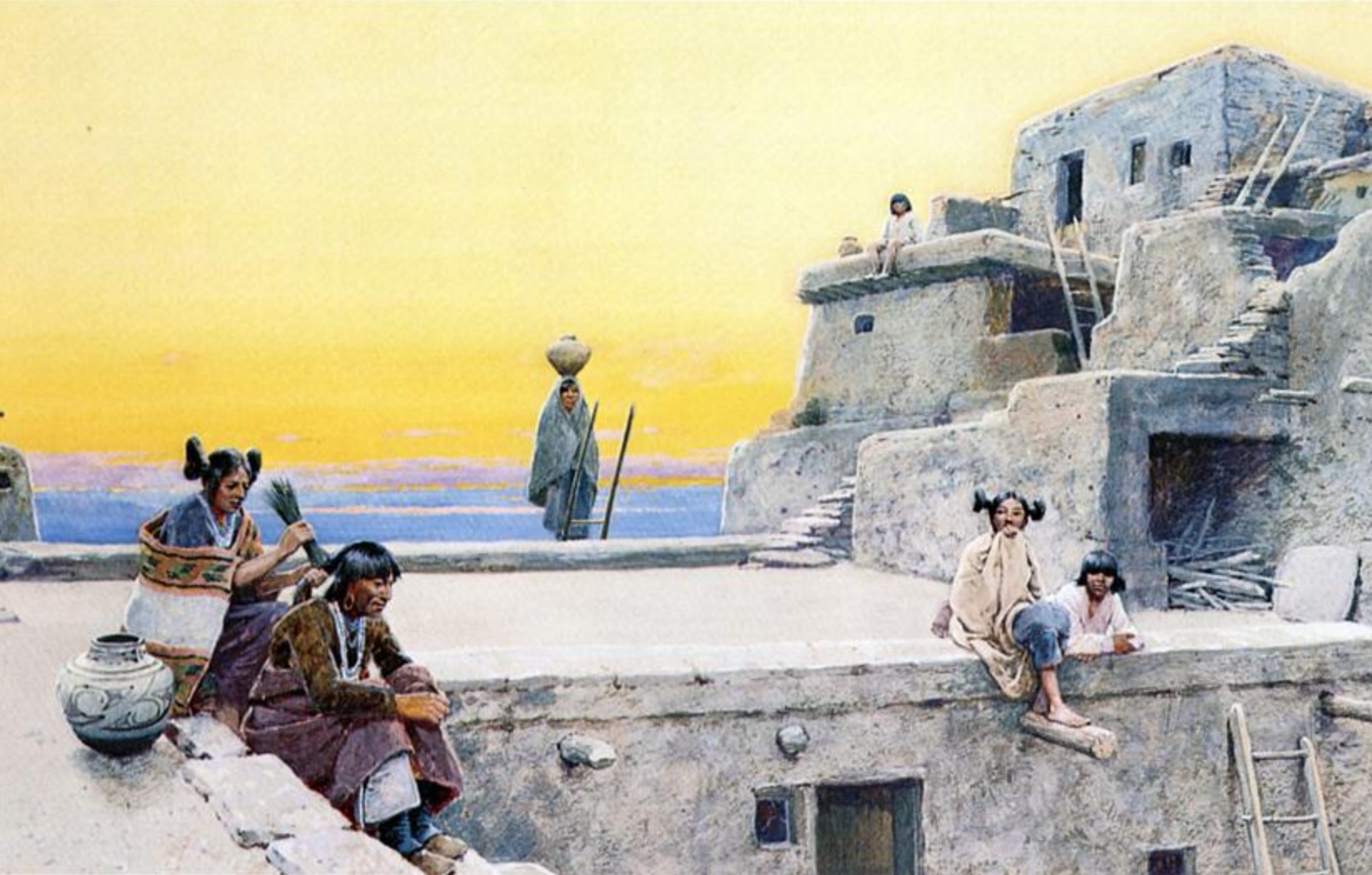 The Hopi Native Americans are a cultural group who embody the true mysteries of time and culture. A mysterious group often referred to by other Native Americans as “the oldest of the people,” the Hopi are a private and mostly isolated tribe, revered for their zealous guarding of traditional and cultural practices.

The westernmost of the Pueblo Native Tribes, the Hopi are the only Pueblo tribe that speaks a Shoshonean language of the Uto-Aztecan linguistic family. The name attributed to the Hopi stems from the term Hopituh-Shi-nu-mu, which can be roughly translated to mean “peaceful people.” Today, the Hopi reside on a reservation nearly 2.5 million acres in size located in northeastern Arizona, just east of the Grand Canyon. The Hopi inhabit 14 villages which are situated atop three mesas rising nearly 600 feet up from the desert floor.

The Hopi tribe is a sedentary culture for at least as far as archaeology can trace (Pueblo II period, 900-1100). The Hopi people lived in masonry buildings built of native stone materials during this period. These buildings are situated around a central plaza and can contain many rooms, each with its own unique purpose. Later on in the Pueblo IV period (1350-1540) these houses and dwellings were heated with coal which served additional functional purposes as well, which included firing pottery.

In the religious or spiritual practices of the Hopi, many unique traditions exist, which help distinguish the belief system of these proud people. For instance, in the Hopi tradition repetitions of four are very important, and play a role in the common spiritual practices. An example of this can be observed in the initiation of young boys and girls between the ages of eight and ten into the kachina cult. Boys were initiated into one of the four men’s societies: Kwan, Ahl, Tao, or Wuwutcimi. These rites can be associated with a special ceremony known as the Powama, a four-day tribal initiation rite.

For girls, the ceremony included grinding corn for a full day at the paternal grandmother’s house. Upon completing this ceremony (which often coincided with reaching puberty), the girls would receive a new name, and sometimes also assume the striking and unique squash blossom hairstyle the Hopi women are known for. This hairstyle was intended as a sign that the young lady was ready for marriage; the squash blossom itself is a sign of fertility in the Hopi tradition.

There are many important ceremonies that are part of the Hopi lifestyle. The Hopi tribe maintains that they are the earth’s caretakers, and thus maintain a connection with the center of the earth. The aforementioned kachina spirits are most important, for they have the power to pass on prayers for rain. The now famous and revered kachina dolls which represent these rain and growing season gods are often carved and sold as crafts today.

Signs of the Solstice

Other ceremonies include the Buffalo Dance to commemorate the days when buffalo were plentiful upon the land, and the Bean Dance, held in February to petition the kachinas for the planting season. The Navajo Dance is undertaken as a tribute to the Navajo Nation.

The Flute and Snake Dances occur alternatively every other year, the latter of which only lasts an hour, but traditionally requires eight days of secret meetings before it can be performed by the priests. During this dance, the priests handle live snakes, even using their mouths to manipulate the snakes without being bitten. As the ceremony ends, the snakes are released back to the desert unharmed to bear the message of rain. Finally, the Flute Dance glorifies those who have passed to the spirit realm during the preceding two years.

The Hopi are an ancient people with a mysterious past. It is said that they are descended from the spiritual masters known as the Anasazi. Regardless of their origins, they are a proud people who carry on with a reverence for the ways of centuries past.